Well, it has been a pretty crazy month for gluten free products! With Coeliac Awareness Week less than two months away (May 9-15, 2016), companies are starting to hot up and get their free from product lines looking tip top.

I know there has been some cynicism about the amount of companies bringing out special gluten free products, but I am all for it. I was lucky being diagnosed when I was young so I don't remember or miss a lot of foods, but that is not the case for everyone.

I also choose to eat a healthy diet - avoiding a lot of processed foods - but many people don't want to and having the choice to be able to eat whatever we want is only a good thing in my eyes. So, before I digress, here is a round up of some of my top finds this month... 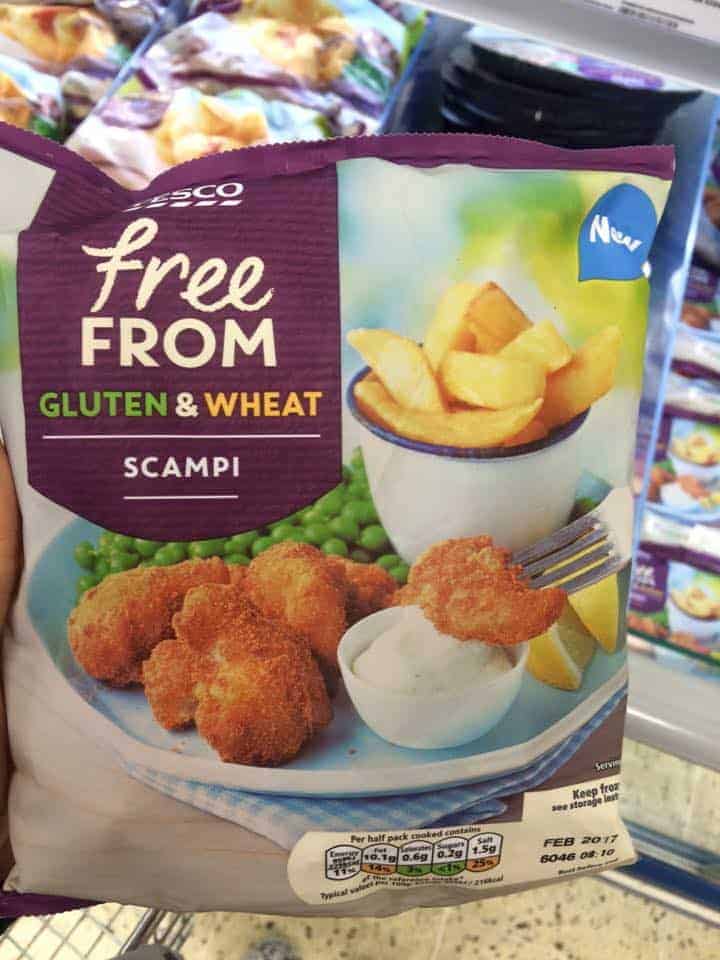 Facebook and Twitter literally erupted when news that Tesco had started selling a gluten and wheat free pack of frozen scampi this month. It was part of the store's new free from range and an exciting addition at that!

I don't ever remember having eaten scampi before - to be completely honest I wasn't even really sure what it is - so I decided it was only right that I try some.

I actually quite enjoyed it. It tasted a bit 'prawny', and the breadcrumbs had a good crunch to them. I probably wouldn't buy this as I don't tend to eat food like this often, but for all those coeliacs who have been missing this pub classic, its put a lot of smiles on faces. 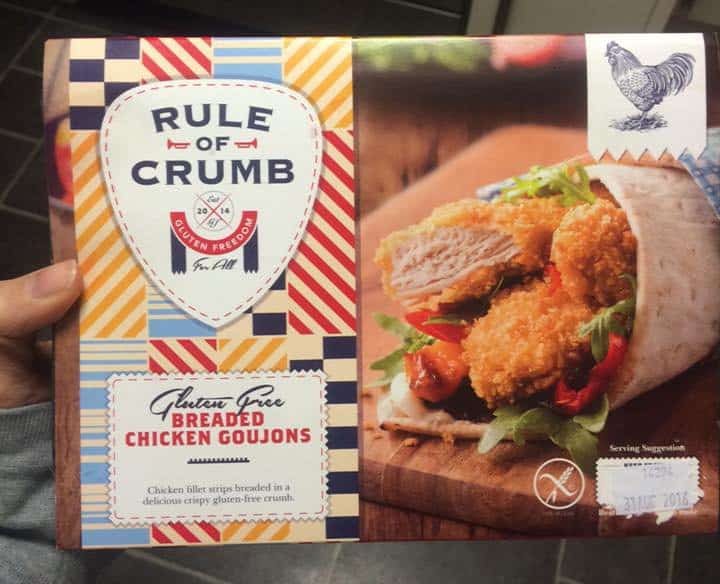 Rule of Crumb very kindly contacted me on Twitter and asked if they could send me some of their products to test out. I am a big fan of branding and I loved the design on their packaging and the quirky blurb on the wrapper.

Again, goujons are not something I would normally eat, but after a tough yoga session the image on the box was just too tempting and I cooked some up to enjoy with some BFree gluten free wraps, salad and mayo.

They were so good! The chicken was really juicy and meaty, and the breadcrumbs had a lovely taste to them. They went perfectly crispy and the whole dinner was a real treat. 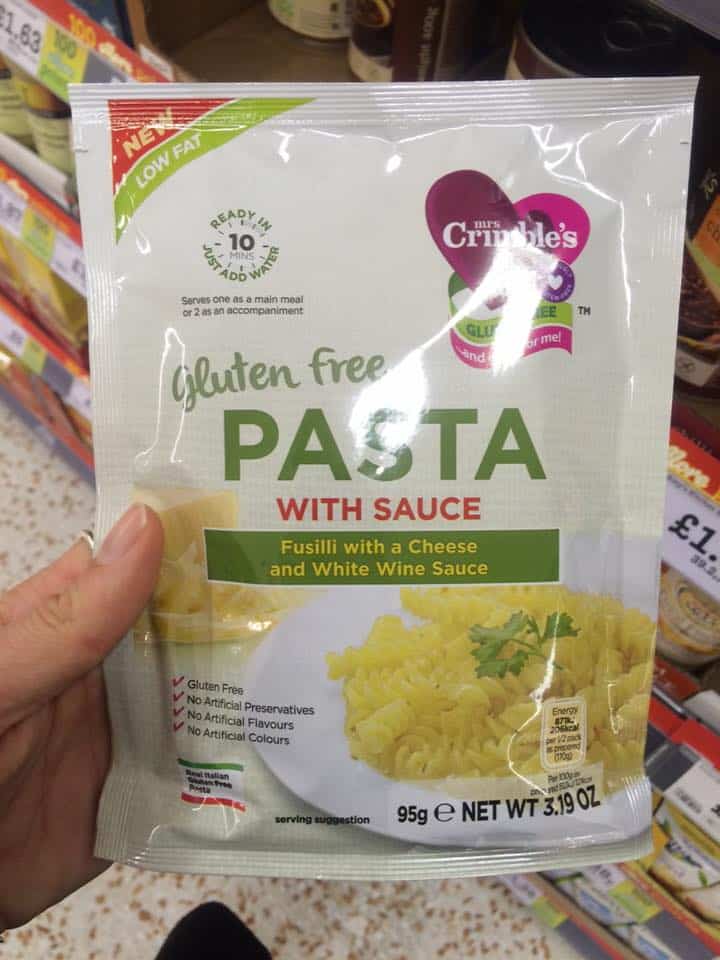 I found myself in Morrisons for the first time in AGES the other day and thought I would check out their gluten free range. I could not believe how much it has grown!

I found loads of yummy treats but one thing that really caught my eye was these gluten free instant pasta packets from Mrs Crimbles - better known for their delicious gluten free macaroons!

The very sight of them brought back dim and distant pre-coeliac memories of making the gluten-filled versions with my brother when we were kids, and I just had to test out the cheese flavour (there is a tomato one too).

I got a little confused by the fact the pack has two compartments - one for pasta and one for the powder - and it was a little bit of a struggle to get it all in the saucepan without it going everywhere. That being said, it was absolutely delicious and just how I remember them - a great find for a quick and easy snack every now and then. 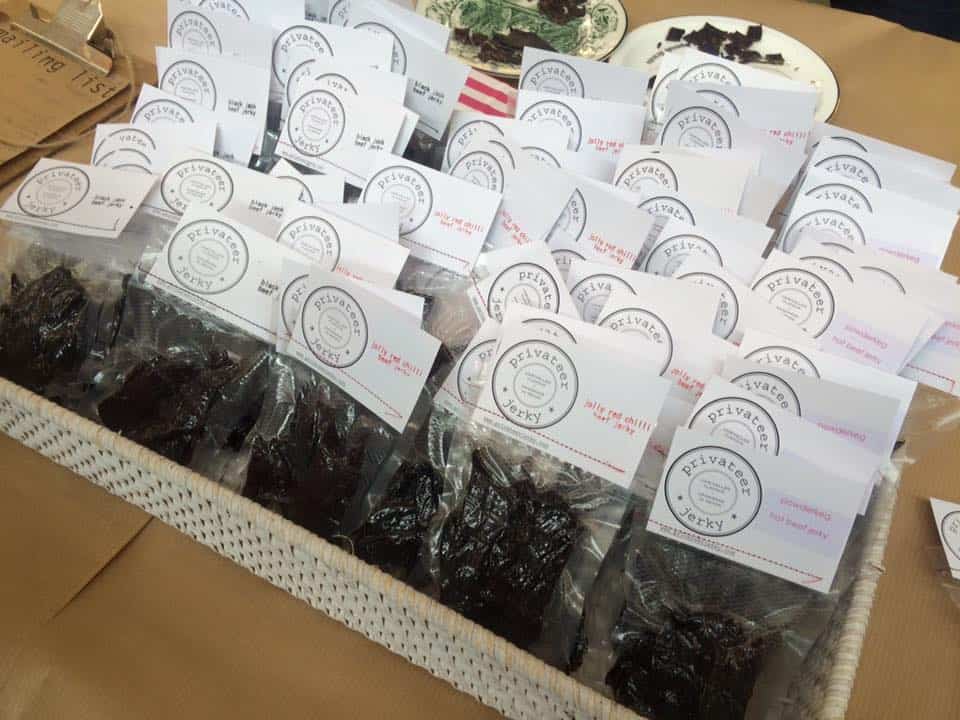 I finally got back down to Barnstaple Real Food Market on Sunday and have to tell you about this delicious new product I have found down there!

Privateer Jerky is made in North Devon, hand sliced and smoked on applewood. I love beef jerky as a healthy, high-protein snack, but it's often made with soy sauce and not gluten free.

This, however, uses gluten free soy sauce and is SO GOOD! There are a range of flavours varying in heat - the spicy ones pack a fiery kick and I would definitely recommend them! There is also a mushroom one for those who don't eat meat, something I haven't seen before.

I wanted to give them a should because in among all the big brands who are producing free from foods, I am still really keen to promote those independent traders who are going the extra mile.

What gluten free foods have you discovered this week? Have you tried any of the products in this post? Comment below and tell me your thoughts!