In all the time I've been diagnosed with coeliac disease, I've always wished their could be a magic button I could press that would tell me if there was gluten in food. Our labelling laws on products in the UK are great, but eating out can be a different ball game. If you're not in a restaurant certified by Coeliac UK, it can feel like playing Russian Roulette with your gut. Too many places offer promises of gluten free menus, but fall down along the way when it comes to things like cross contamination or staff knowledge of allergens.

So when I was approached to work with Nima on their UK launch, I was intrigued. A magical little gadget which tests samples of food and tells you if they're gluten free? It was something I had to try - and I was pretty impressed with the results. The idea that I could test a sample of a meal meant I was being offered another layer of protection in deciding if I felt food was safe for me to eat. So I snapped up the chance to give this little gadget a whirl!

So what is Nima? 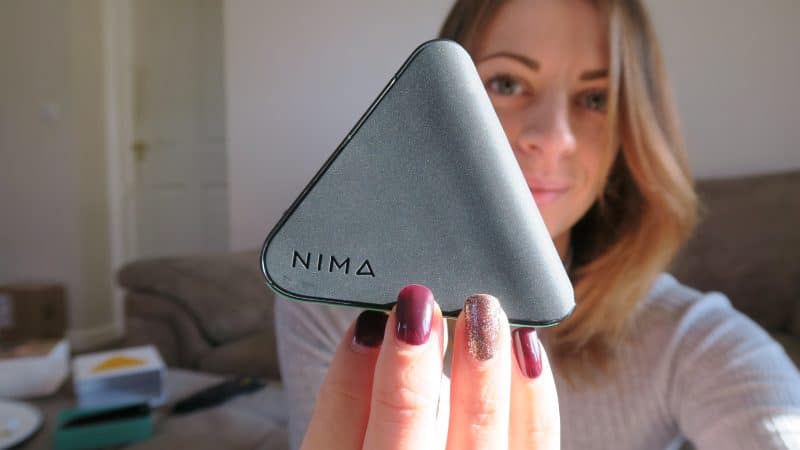 Nima is a portable, pocket-sized device in the shape of a triangle which you can easily take with you. It also has single-use capsules which you use each time you want to test food. It's around 8cm high and 9.cm long, so it's pretty easy to transport. Overall it's pretty lightweight, so you wouldn't feel like you're lugging a whole chemistry set with you. Just chuck the sensor and a couple of capsules in your handbag and you're away!

How does Nima work? 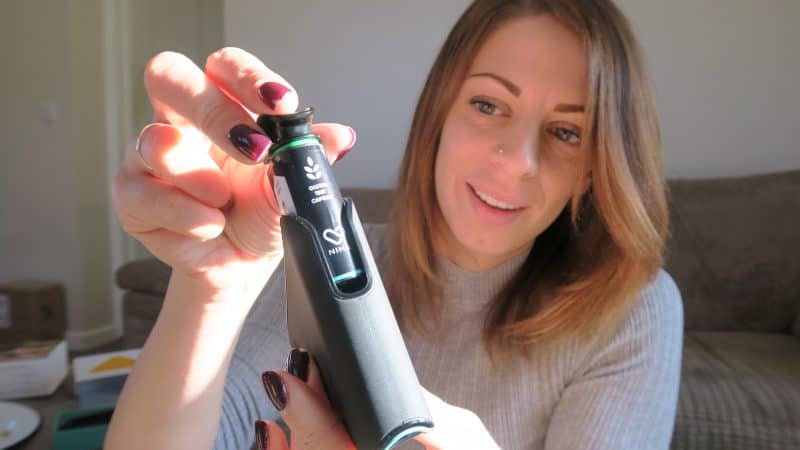 While Nima is new to the UK - it launched this month at the Liverpool Allergy and Free From Show - it's been around in America for a while now. To test food, you simply take a pea-sized sample of food and place it in one of the single use capsules. Twist it shut, place in the sensor and then press the magic button. It takes about 2-4 minutes to test, and then you'll either get a smiley face, meaning 'gluten free', or a sheaf of wheat, meaning gluten has been detected.

According to Nima, it has 96.9% accuracy testing down to 20ppm (parts per million), which is the threshold for something to be labeled as gluten free. It can detect gluten at lower levels too, which means some food which is labelled as gluten free may come up as showing gluten detected. However, in all the certified gluten free food I tested, this didn't happen once.

When would you use Nima? 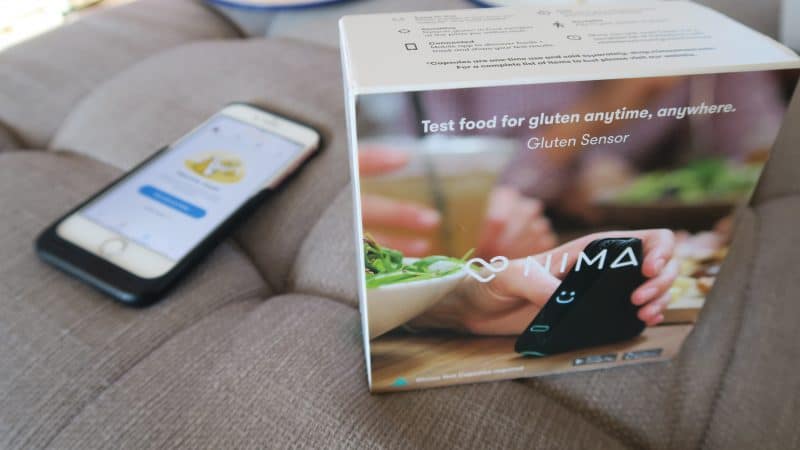 Personally, I wouldn't use Nima to test any pre-packaged gluten free foods. I'm confident in the labeling laws and that if something is marked gluten free and on the Coeliac UK directory list, it's safe to eat.

Where I think Nima comes into its own is when you're travelling. And travelling with coeliac disease or a gluten intolerance can be hard, especially when there are language barriers. I mean, I once went to the effort to learn enough French to explain I had coeliac disease and needed gluten free food, and the restaurant owner started directing me to a hospital!

Sometimes you'll be reassured, in broken English, that food is ok to eat, but you get a gut feeling that really, the gluten free element has been lost in translation. Where Nima comes in handy, is that it gives you an extra layer of protection. You can test a sample of the food to give you reassurance in deciding whether or not to eat a meal.

Obviously you need to go with a combination of your gut feeling and what Nima says, because Nima only tests a pea-sized sample of meal. However, if you're 90% sure your meal is gluten free and the waiter has understood you, and your Nima also shows there is no gluten, that in my head would give me the confidence to eat there. 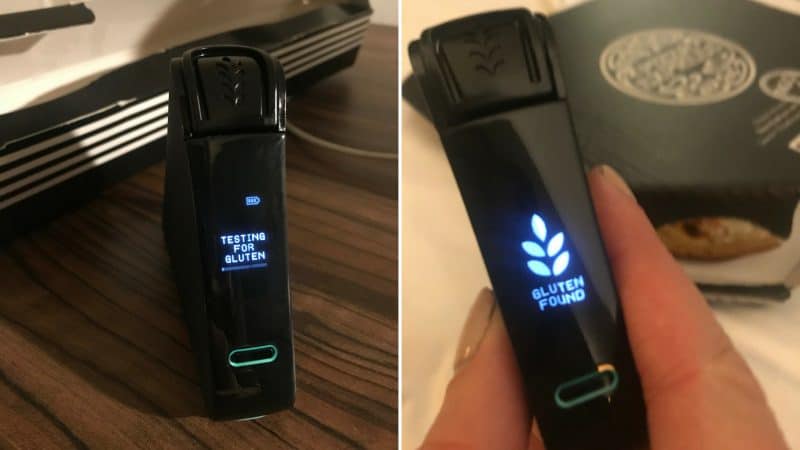 The most helpful time I used Nima was when I ordered Pizza Express on Deliveroo, but the doughballs that arrived didn't have their usual gluten free sticker on. I mean, the gluten free ones look slightly different but sometimes it's a bit difficult to tell just by looking. I tested a sample and was sad to find they had sent me the wrong ones! Luckily, the Nima took the first bite for me, instead of my extremely hungry self having to wonder whether to risk it or not. Needless to say, they ended up in the bin!

Another time I think Nima would be really helpful, is when you've got that friend or family member who just doesn't quite get it. They promise to cook you a safe meal, but you've been glutened by them before, or they don't fill you with confidence with the ingredients knowledge or cross-contamination avoidance. With Nima you could use it as a visual reference to test the food they've made you and explain to them how important it is to keep everything strictly gluten free. 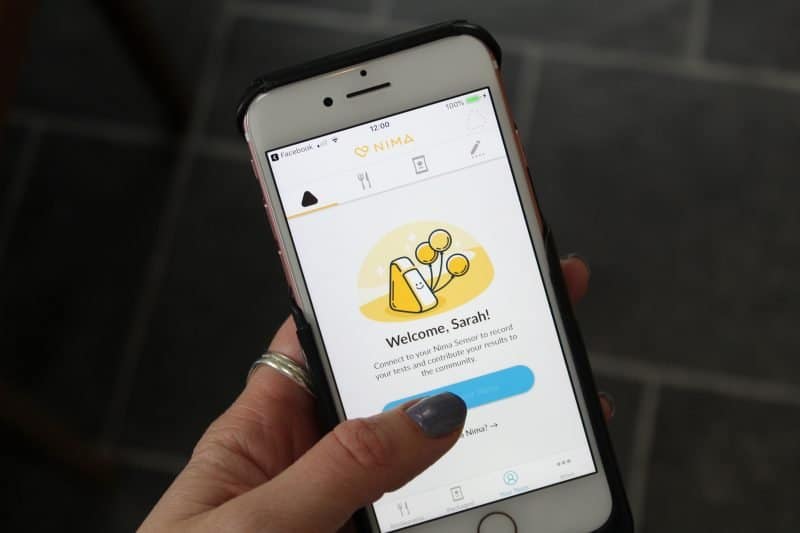 One of the other great things about Nima is the free app that comes with it. Because you can put in all the places you've eaten and whether they were safe, and it's building this awesome map! So if you're visiting an area, you can see where everyone else has eaten, and feel more confident when choosing places to eat.

As Nima takes off in the UK and more people use it, I think this will become a really handy tool for finding new safe places to eat. Anything that helps is always welcome in my world! 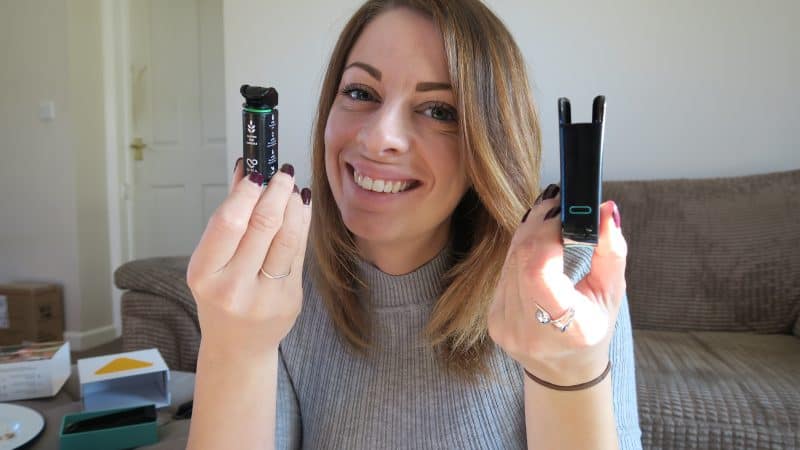 I think this is a really cool little gadget, and it's exciting that something like this has come to the market place. Until restaurants come under more stricter regulations, I think the Nima can help give a little reassurance in what can be a gluten-filled minefield. While it's not 100%, I think combined with your gut instinct, Nima can help to give you another tool to try and help you decide if you think somewhere is safe for you to eat.

Want to try Nima for yourself? Check out the klarify.me website where you can buy the Nima starter kit for £189.99.