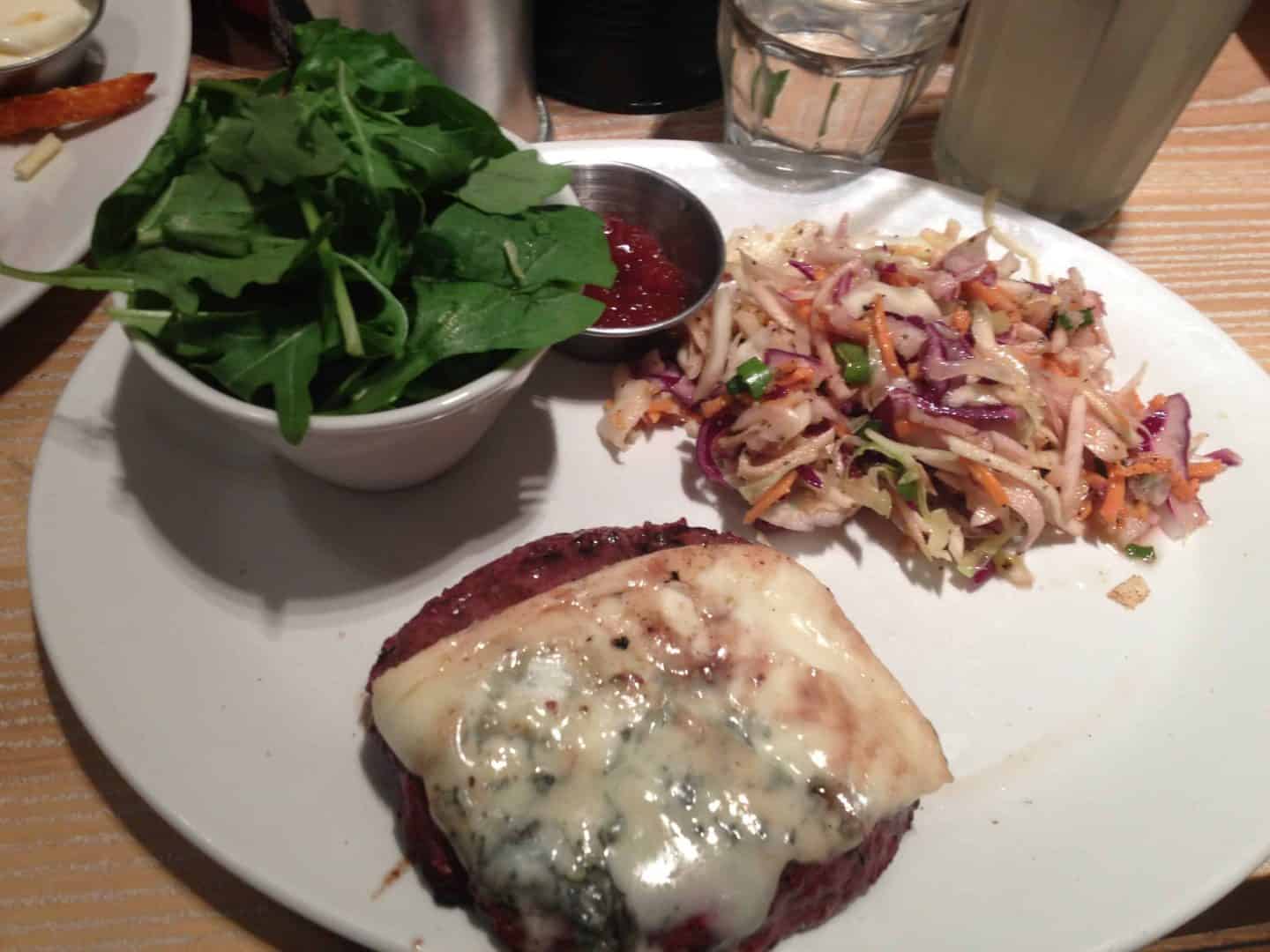 When PT Steve and I went on a mission to Bristol to shop for our holiday, we needed some serious re-fuelling before hitting Primark. There were loads of great chains which I knew did gluten free at Cabot’s Circus – Nandos, Bella Italia, TGI Fridays….but there was one place that caught my eye. The Gourmet Burger Kitchen (GBK) looked delicious, so in we trotted to suss out what I could eat.

The good news was – quite a lot! GBK had introduced a ‘go naked’ – so the beef burgers without a bun were gluten free. Instead of a bun, you got salad and their home made coleslaw, so it seemed ideal.

There was quite a lot of burgers that caught my eye, but I decided to go for the Blue Cheese – with salad, mayo, relish and a slice of Gorgonzola. While we waited, we got drinks – I got a lemon and lime fizz which was really refreshing, and Steve had the most amazing milkshake ever! It was a special on for the day – Eton Mess – and came in a huge tumbler with chunks of meringue – we were almost full up sharing it by the time the food arrived!

But when it did, I was massively impressed. Steve had a burger with a bun so I couldn’t try that, but we also ordered the skinny fries and sweet potato fries, which came with a bacon mayo. A weird concept, but this was SO good, I pretty much devoured the whole thing and poor Steve didn’t get a look in!

When I got my plate I was quite impressed at the portion sizes, though my burger did look a little sad on its own without a bun. The sides were really nice though – green leaves are always a plus and the coleslaw was delicious – it was kind of mayo-less, but just as tasty. The burger itself was amazing, I LOVE blue cheese and combined with the succulent, juicy beef burger and the tangy salsa it was a match made in heaven.

Overall, I was really impressed with the food at GBK. I was also impressed at how helpful the staff were with me and helping me with what I could and couldn’t eat. I think it also helped when they told me one the people who worked there had coeliac disease as well. I wish there was a GBK near me, but next time I’m in Bristol I will definitely stop by.

To view GBK’s menu and find out where the nearest one to you is, click here.