I get a LOT of requests from people on holiday in North Devon asking where they can find gluten free places to eat in Woolacombe.

I've done a big round-up post of gluten free places to eat in North Devon (there are a LOT) and gluten free in Barnstaple.

As I get asked so much, I've decided to pull together a gluten free Woolacombe guide now too!

Woolacombe is the tourist hotspot of North Devon, with several large holiday parks, hotels, and the most beautiful beach.

Because it's such a tourist-trap I haven't been for a long time, save for the occasional trip to some of the quieter, surrounding coves.

The good news is, I recently spent a day there and found lots of gluten free places to eat in Woolacombe!

So whether you live in North Devon or are visiting on holiday, here are some gluten free places to eat in Woolacombe.

This is by no means inclusive - there are probably some other great spots.

But here are some gluten free places to eat in Woolacombe which I found on my visit, and through some research. 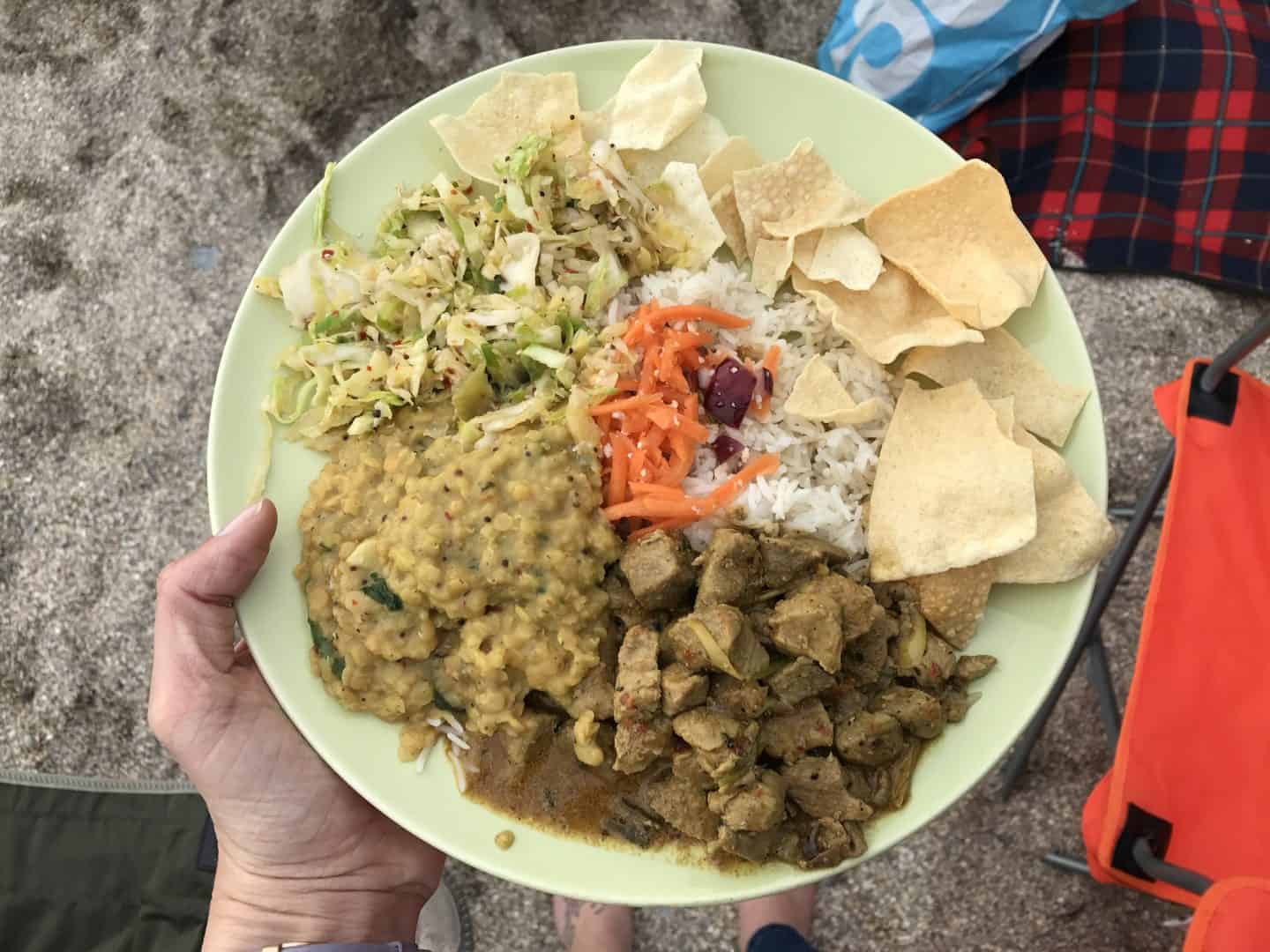 It had to be top of the list, because the curry at Barricane Beach is simply WONDERFUL.

You'll find this tiny little cove around the corner from Woolacombe. You could almost miss it, but you certainly wouldn't want to.

The cafe serves up light food during the day but from 5pm it serves the most incredible gluten and dairy free Sri Lankan curries.

Get there early to avoid missing out (and BYOB) because once it's gone, it's gone. (Only open Easter until September, weather depending) 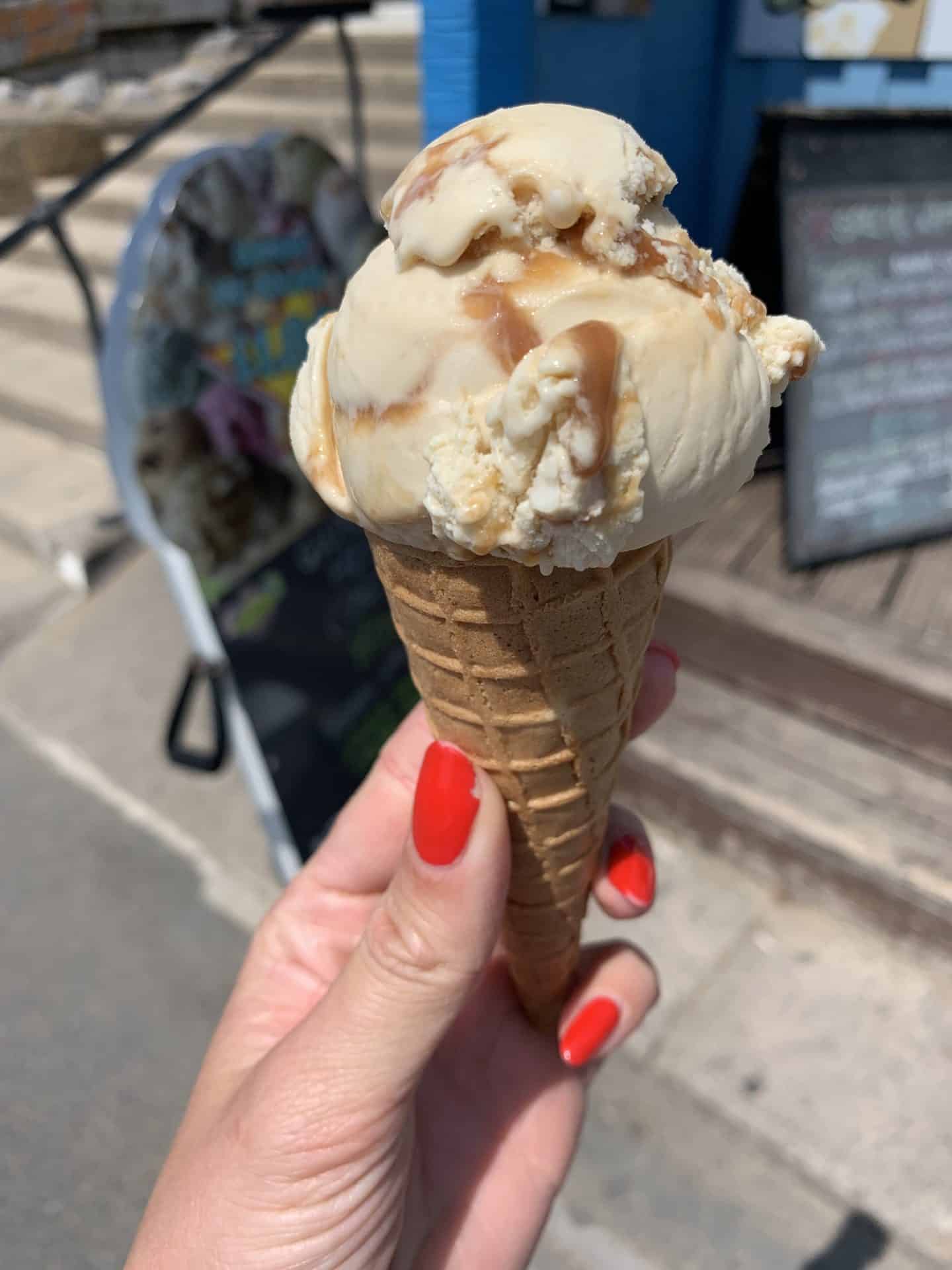 I stumbled across this little shack in the middle of Woolacombe almost by accident as my friend was talking about the (gluten-filled) waffles.

You have to pay an extra 80p but they are a good-sized gluten free cone and a lot of the ice-cream flavours are gluten free.

You need to have ice-cream by the seaside, right? Definitely the best place for a gluten free ice-cream in Woolacombe. I've been wanting to go to Meraki for ages because I loved the look of this funky cafe - and they serve fantastic coffee!

So I was even more pleasantly surprised to see so many gluten free options on their menu!

They have gluten free bread (at a £1 extra charge) and can make many of the lunch and brunch dishes gluten free.

They also have lots of vegetarian and vegan options and a gluten free almond brownie which looked pretty tasty. 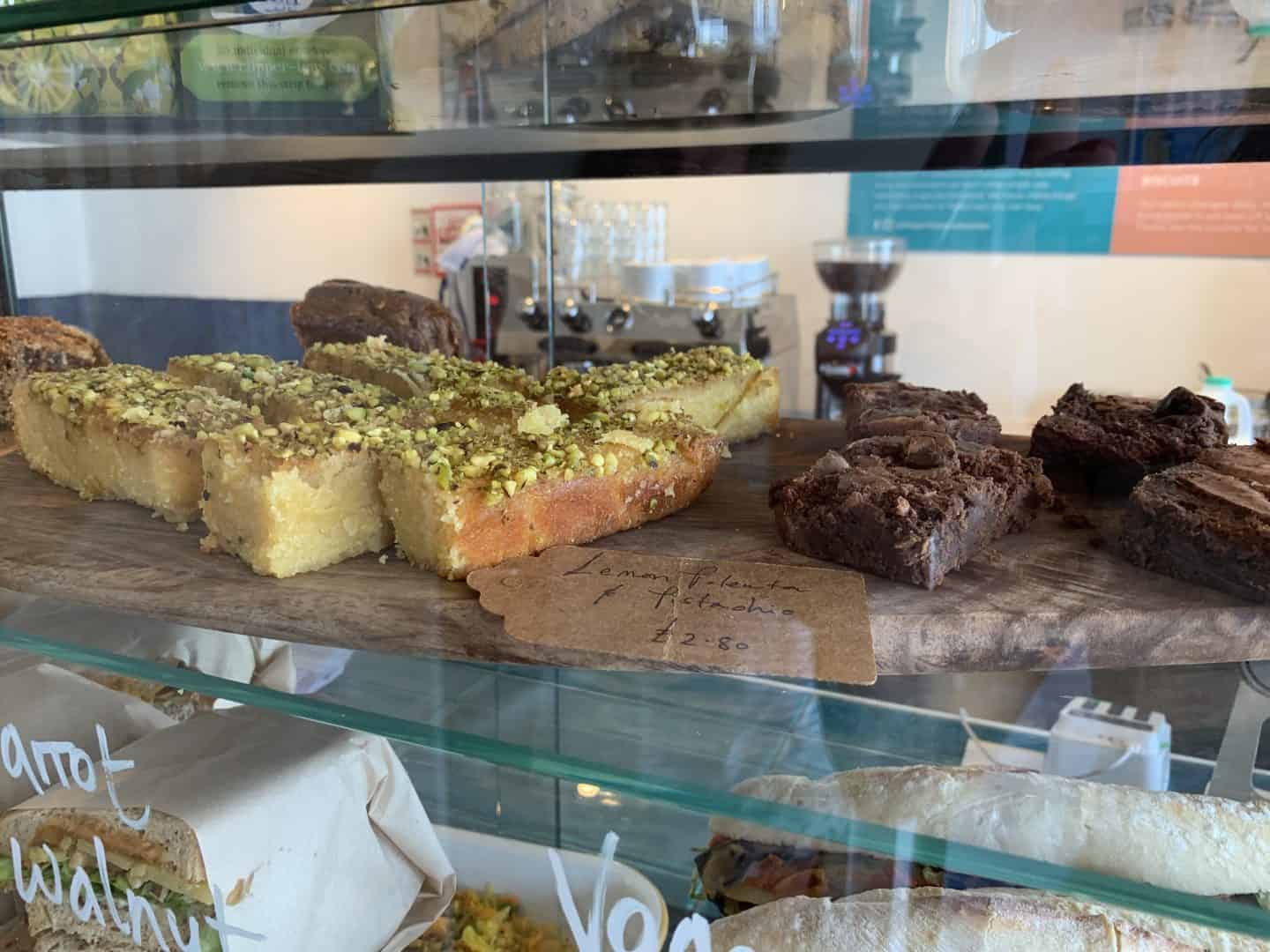 The Porthole can be found along Marine Drive - just above middle beach and away from some of the crowds.

It's a lovely spot to park up and enjoy something to eat with an outstanding view across the whole beach!

I asked about their gluten free options and on the day this include all of the salads and two varieties of cake.

The lady there said they sometimes have a tortilla too. Good coffee and some lovely drinks - plus they advocate being a plastic free business as well! 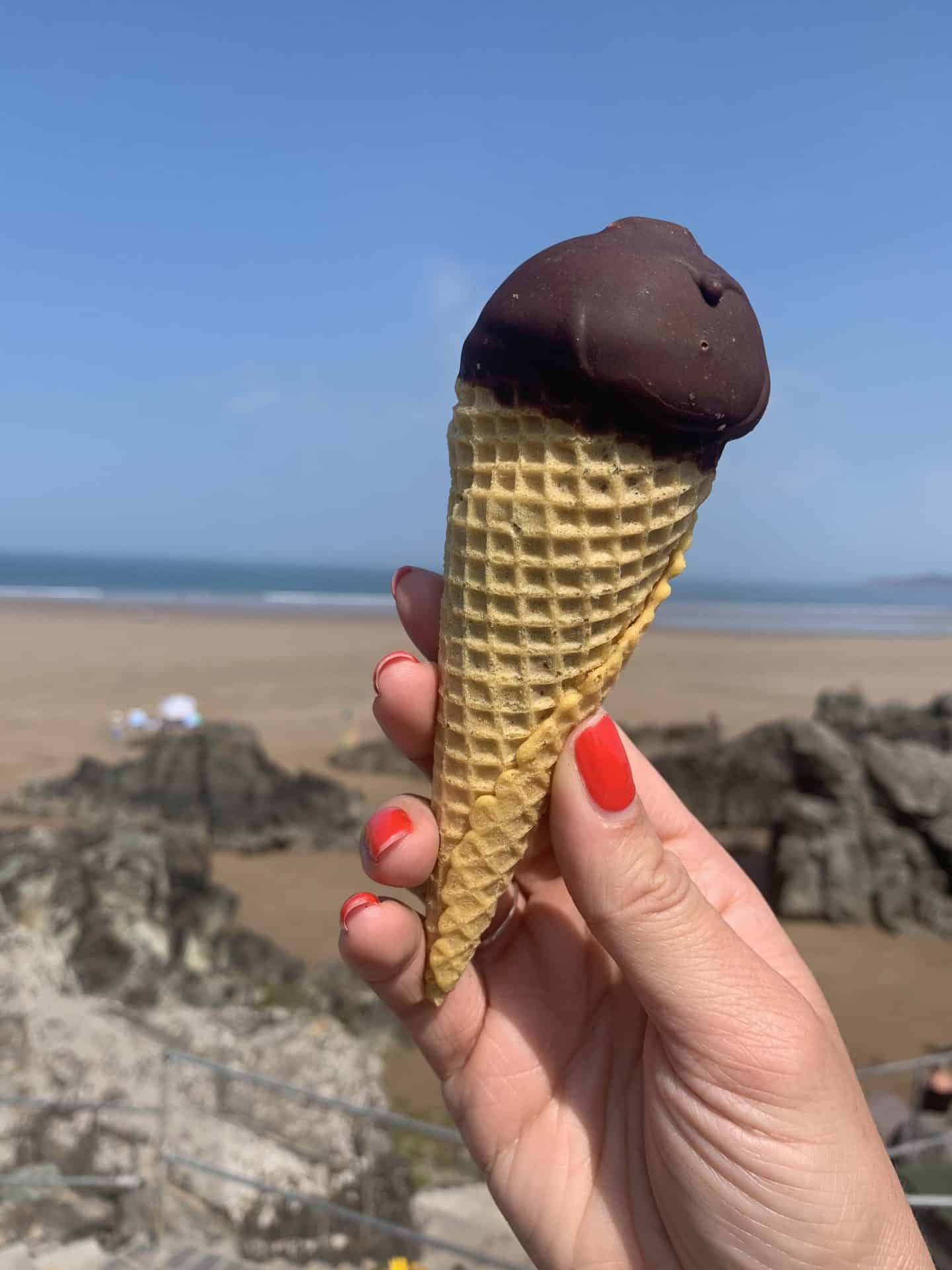 We walked from The Porthole to Putsborough where there's a nice little cafe selling ice-creams (including vegan Magnums!) and some lunch options.

They had things like jacket potatoes so there would definitely be options if you're looking for gluten free in Putsborough.

I picked up a Swedish Glace ice-cream which was lovely.

It was nice to have the choice of some gluten and dairy free options with the lollies and scooped ice-creams. 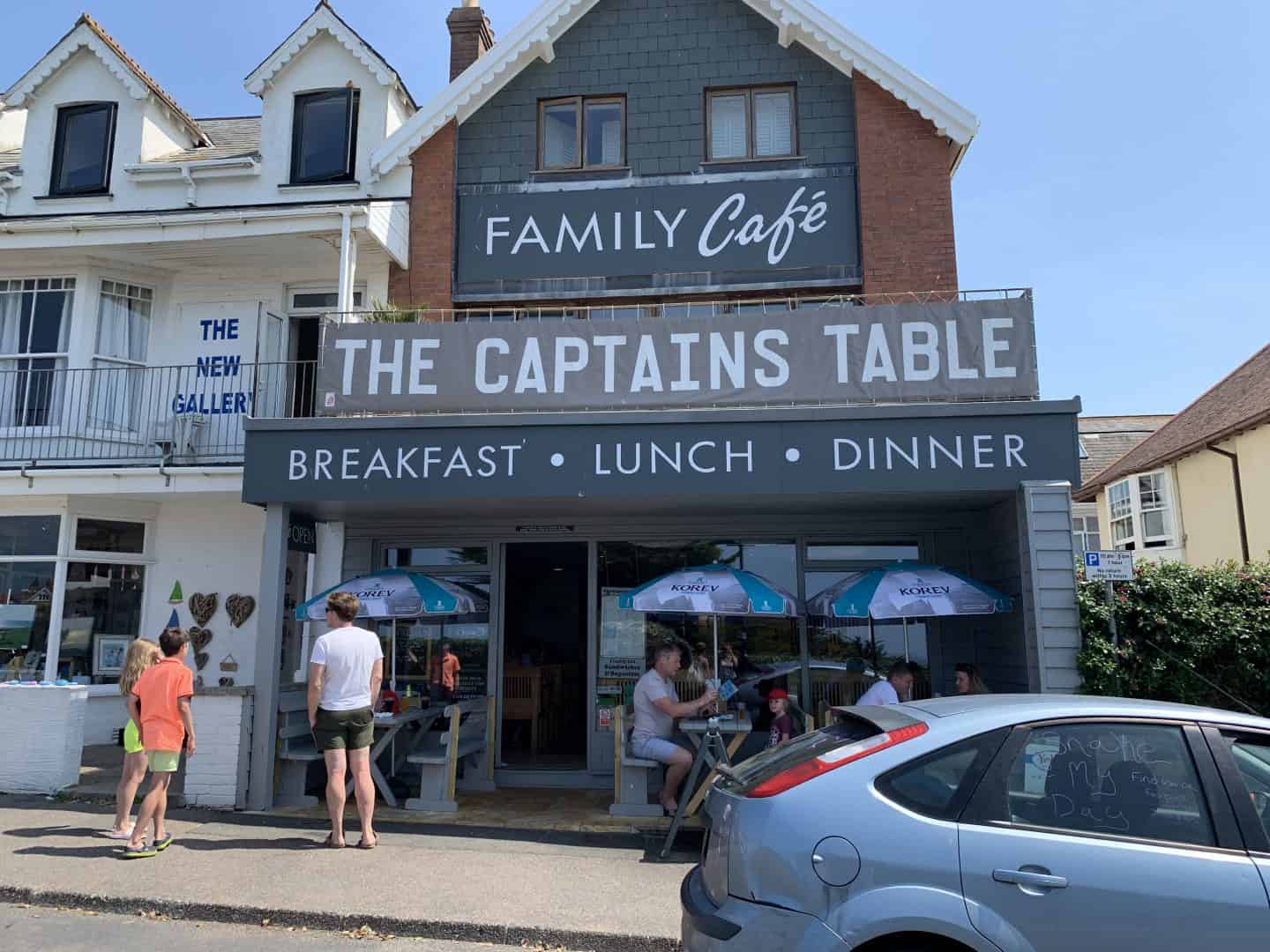 I popped in here quickly to browse their menu and they seemed to have a good selection of choices.

The Captain's Table in Woolacombe had a separate gluten free menu.

Choices included gluten free sandwiches and salads for lunches and a variety of breakfast options.

They also had mains including cottage pie, mussels, steak and fish - which obviously might change slightly depending when you visit.

I've never been here before but a quick search of the internet found they seem to have a lot of good gluten free options - and some vegan too.

These include loaded chips, jacket potatoes, curries and some tapas options too.

I spotted these guys on Instagram and their pizzas look absolutely delicious!

I've not tried them myself but hoping to get down there to try them out soon.

When I enquired at Fudgie's Bakehouse I was told they go a gluten free Cornish or Cheese and Onion pasty.

This could be a great place to stop off if you're looking for a quick lunch.

I didn't ask much more regarding cross contamination as we didn't eat there, but it could be worth a visit.

Another place I've never visited before is The Fortescue Arms.

However, their website states they cater for gluten free with some gluten free options marked on their menu.

Might be worth a look if you're in the area and want to check them out.

Brundle's is a new restaurant in Woolacombe so I contacted them to ask if they offered gluten free options. T

hey said: "A lot of our popular dishes are gluten free and many items can be adapted as they are cooked fresh to order.

"Our menu changes every day but we currently have twelve dishes on our menu that are gluten free or can be adapted (usually by using an alternative to soy sauce)."

Sounds pretty good to me!

Around the corner from Woolacombe is the beautiful Mortehoe.

I've been wanting to try Miss Fea's for ages as I always see them posting gorgeous gluten free cakes on Facebook!

They're happy to cater for gluten free and other dietary requirements, and open 11am-4pm through the summer as well as some special evening occasions.

I can't wait to visit one day!

Like I said previously, this post on gluten free places to eat in Woolacombe is by no means inclusive, but I hope it helps a little.

If you find anywhere else gluten free in that area I'd love to know so please do leave a comment below or share it in my Facebook group.

I'll keep this guide updated as I find new spots so do let me know about any you find.

Here's a round-up of all the best places to eat gluten free in Woolacombe. 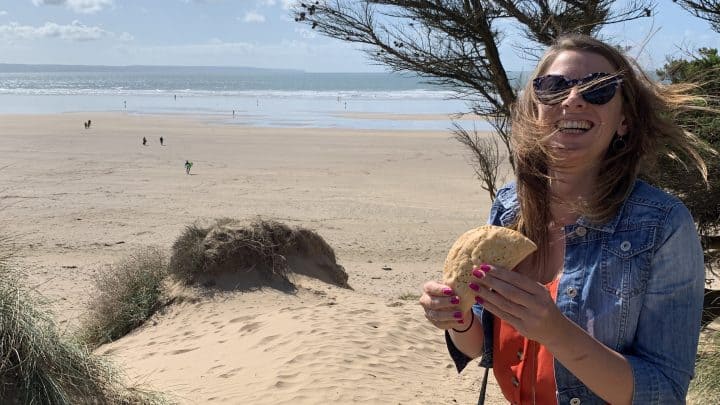 Saunton and Croyde have lots of gluten free option - this is a break-down of the best spots to eat!

There are SO many gluten free restaurants in Barnstaple, here are a few ideas of places to eat out with coeliac disease. 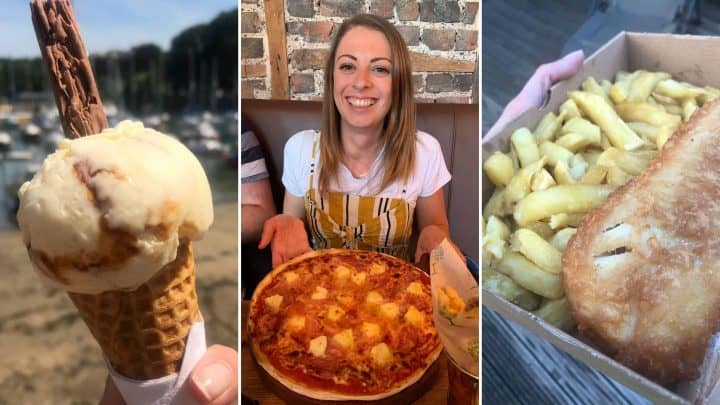 Here's my full list of all the best gluten free places to eat in North Devon! Including gluten free pasties, ice-creams, pizza, cream teas and fish and chips!