For anyone who hasn't been caught up in the world-wide enraged (virtual) mob of coeliacs on Twitter and Facebook, there's been a lot of upset over an 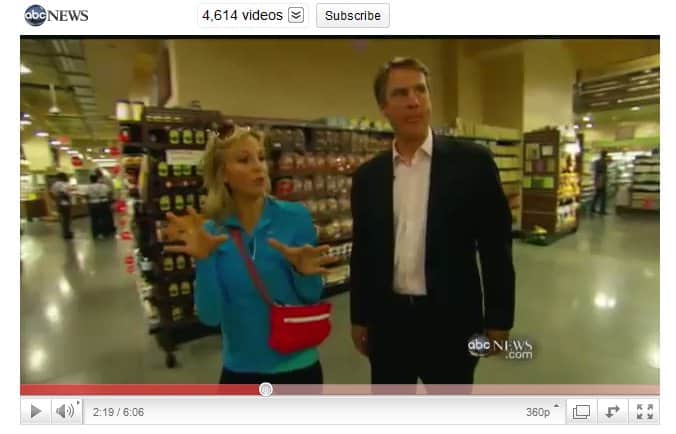 Click on the pic if you want to see the vid for yourself!

ABC television package on gluten free diets (which you can view by clicking here).

The package, featured on ABC Nightline on 3rd November, is mainly based around a celeb hype of "going gluten free", and seems to have widely missed the mark in the view of most coeliacs.

What could have been a perfect chance to provide an informative and educational piece has portrayed a gluten-free diet as just another faddy diet choice.

So it's no wonder that so many other bloggers and tweeters have been airing their anger towards the ABC piece, voiced by Terry Moran.

Dr Peter Green from the New York Presbyterian Hospital is featured on the piece, thought given little airtime in my opinion, explaining that the gluten free diet is not completely healthy, and can lead to a lack in B Vitamins.

Elizabeth Hasselbeck, an American TV Host and a sufferer of coeliac disease is also featured in the piece, talking through how much better she feels after going gluten free, and how many people would be amazed at how much energy they would have if they went gluten free.

So everyone else has had their say, here's my view!

Having been gluten-free for nearly a decade (oo that makes me feel old!) and having to have to sit through so many meals watching people devouring meals I can only dream of eating, going round the supermarket reading ingredients lists begging "please let me be able to eat this!" and smiling through my teeth when I'm offered that mouth-watering piece of birthday cake that I can't eat, I'd love to be able to have the choice.

Would I choose coeliac disease as a weight-loss option? I can see where the logic of this is - essentially cutting out gluten without replacing products such as bread or pasta with gluten-free substitutes would result in weight loss I suppose.

I mean, surely if you cut out these items, you'd be forced to eat healtheir foods such as salads or steamed veg or, well, you'd starve wouldn't you?

I did, like many others, find this news piece quite insulting, I mean - it's bad enough people already believe I'm a fussy eater, I don't need this tripe advocating their cause.

What we need is education - for people to understand what gluten is and what it goes into. And if what it takes to achieve this is for everyone to believe "gluten free" is the next Atkins diet, then I suppose the publicity can only be a good thing.

But don't put coeliac disease down as being part of this phase, because when the gluten-free fashion is tossed out with yesterday's looks, we'll still be here, munching on our gluten free bread and wishing we had the option to go back and eat whatever we want.

« Parties will never be the same again....
A very important lesson: How not to make soup »