Most people dread airline food, but when you have coeliac disease it can be a nightmare. Stuck in the sky for nine hours with no food would literally be hell for me - so when I request a gluten free meal I sit with my fingers crossed hoping I've got it.

I've flown with British Airways before and had a reasonably good gluten free experience (read more about that here), but never with Thomas Cook. I couldn't find any other experiences with them online so I had to hope on my flight to Cuba my gluten free request would go through! Despite having checked with the travel agent about four times before flying, when the air stewardess reached my seat and handed me a non-gluten free meal, I began to panic. Which quickly worsened when she looked down the list of 'special meals' and couldn't find my name.

It could have been because we booked seats but then upgraded at the airport, but after having a few stern words she somehow managed to magically find a gluten free meal somewhere - so not sure exactly what the mix up had been, but I was too relieved to even care, and she took my details so she could triple check my gluten free request would be on my flight home. 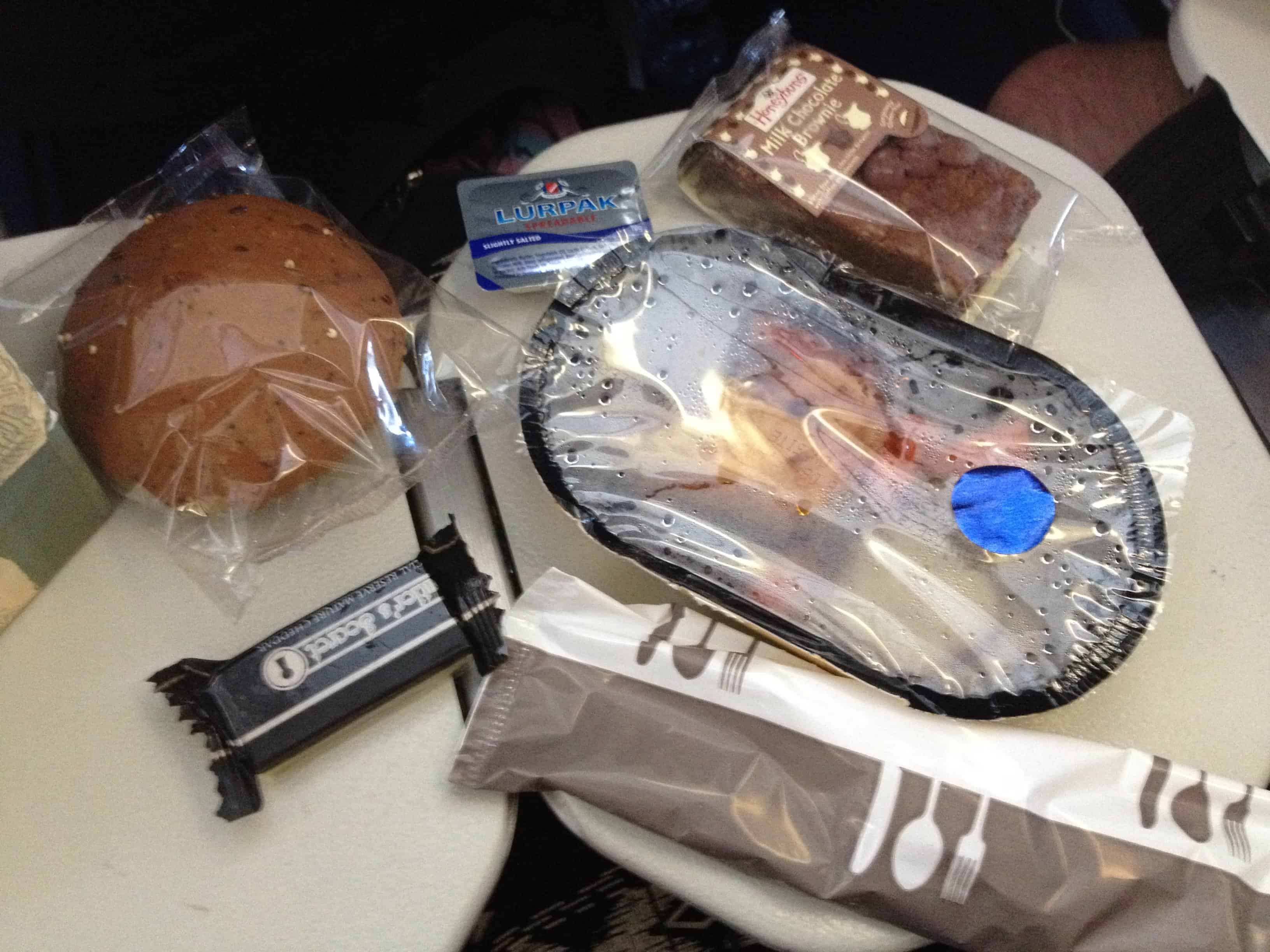 So what was the meal itself like? Well, everyone else had an option of sausage or chicken with mash - and I also had chicken, so I didn't feel too left out! As far as an airline meal went it was, well, edible. I was glad it had some form of gravy, the chicken was a little shriveled but overall it was pretty decent - and not that different from what Steve had in his meal. It was nice to have sliced potatoes as well - would have appreciated a bit more food though, the chicken was tiny! 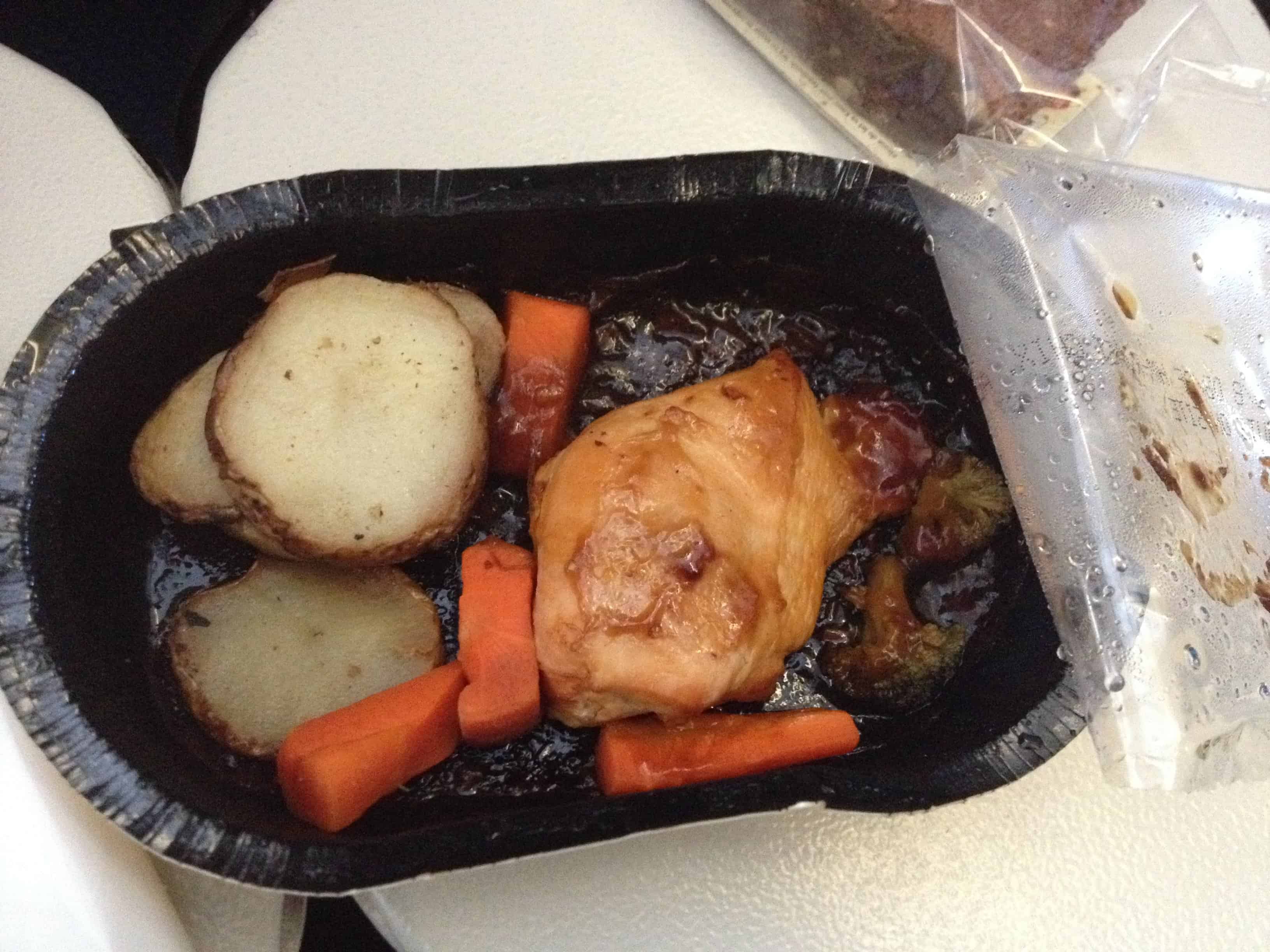 Alongside the micro-meal, I also had a bread roll, brownie and chunk of cheese. This was compared to the 'normal' meal which had bread, two chunks of cheese, crackers, and some form of pudding.

The bread roll reminded me of when I first got diagnosed and the gluten free bread was so rock solid you could build a house with it. It was solid - I took one bite, and even tried to soften it with some butter and the rest of the gravy, but I just couldn't eat. If I could give some constructive criticism to Thomas Cook, I would say perhaps they should invest in some gluten free crackers, instead of the bread, which would probably keep a lot better and be more edible!

But the absolute BEST part of the meal, was the surprise of a Honeybuns brownie!!

The milk chocolate brownie made my day - a delicious edition to the meal and much better than Steve's pudding! A great sweet treat, this brownie was rich and chocolately, the perfect texture, and with a hint of coffee too! It was delicious.

On my flight home, I forgot to take some photos, but I had some braised beef which was actually quite tasty (though still skimping on the meat content) and for the 'breakfast' I had fruit and yoghurt - everyone else had this plus a muffin. With gluten free muffins so easy to source, it was a shame I had to miss out.

It does annoy me, when I pay exactly the same for a meal as everyone else, yet they just take out the 'gluteny' things. Surely, as a paying customer, they should replace these things?

Overall though, the meal kept me satisfied until I could hit the all inclusive buffet at the hotel - and Wetherspoon when I got back to Gatwick - so it did the trick. Although the main meals weren't quite as filling as the British Airways ones, I think the fact they have Honeybuns on board won it for me. Sorry BA, Thomas Cook has certainly led the way. But please, someone sort out those rolls! With so many good options out there, why settle for the crap ones?